The Green Welly Stop is a third generation family owned business that prides itself on providing Good Food and Fine Shopping. The retail shops and restaurant endeavour to have something for everyone covering all spectrums of age, gender and travelling method, thus making it "the perfect spot for a halfway stop".

With a range of home made food available in our Restaurant and Snack Stop Café, award winning toilets, huge range of gifts, outdoor fashionwear and an abundance of rare whiskies, we believe there is something for everyone. 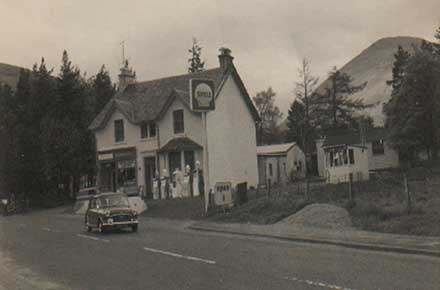 In the beginning, a long time ago. (1965); Betty and Les Gosden sold their house in Edinburgh, cashed in pensions and moved, lock stock and barrel to Tyndrum. Admittedly, it took a lot of deliberation and debate. When Betty and Les first viewed the property (from the cross roads) they were greeted with the most stunning Tyndrum spectacle of low clouds, zero visibility and that typical Tyndrum rain.. Attractive? No. Enough to give up a management job, a lovely house in Edinburgh and up-root the family? Maybe. The second visit sold it for them. On that visit, May and Dig Gosden accompanied them to help give a second opinion. They could at least on that day, see the village from the cross roads!

It makes you wonder when Betty and Les looked down upon the village all those years ago. Did they envisage the expansions, improvements and name changes? More importantly, that in 2013 we would still be here 48 years down the line, with the third generation of the family managing our ever changing business? I do know that Les did work out that it would be geographically impossible to by-pass Tyndrum. He had a point. A main road junction, two railway stations and surrounding mountains, made the location just about perfect. 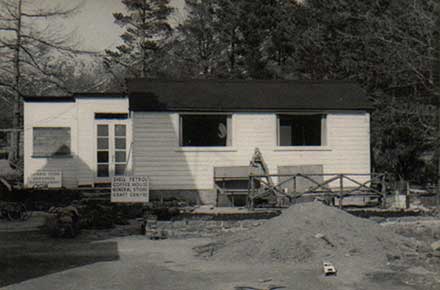 After paying what could be considered to be a pretty penny or two, Betty and son, Lamond Gosden moved up to Tyndrum, whilst Les worked his notice in his management job. Betty's brother Jimmy was on hand too, to help with the all important move. October of 1965, was the start of a family business that was eventually to become a 'bit' of a landmark.

So, what did the 'pretty penny' buy the family? It included the 6 bedroom house, post office and shop, two travelling vans (with two resident mice - free of charge), petrol pumps and a coal business. In the earlier views of the business you can see the little shed to the right of the petrol pumps -this was the 'Shell Shop' where you paid for your fuel. 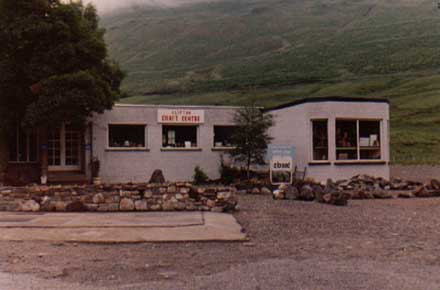 Eventually, Les joined Betty, Lamond and Jimmy, having wrapped up his job in Glasgow. Not long after that Derek and Lesley Wilkie returned home from living in Nigeria with a very young Iain! All the family lived in the house above the post office.

Derek Wilkie had also uprooted his established management career as a mining engineer to move to the wilds of Tyndrum. Was it really so far removed from living in the bush in Nigeria? Lesley tells the tales of moving as a new bride to Nigeria to join Derek, and didn't have a clue how to even boil an egg. Boiling eggs, by the time she got to Tyndrum were down to a fine art, which was just as well, considering how important Lesley's role was to become in the family business. 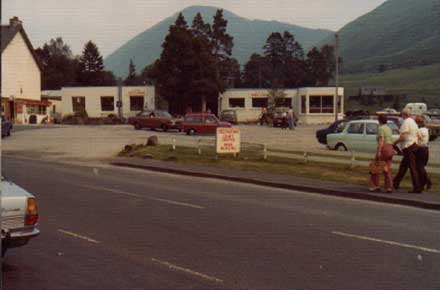 There was a seriously big learning curve for all the family - in Betty's notes; she was panicking, wondering how a housewife and mother for 25 years was going to cope! One of the notations she made was that ordering for the shop in those days was hit or miss. When she wrote the notes, in 1995, she said that there were still tins of floor polish in the house from all those years ago! All of the family have had their share of ordering blunders, I am sure. Derek and his 50,000 sandwich packs springs to mind! Now, in 2009, 50k sandwich packs would not last very long!

The new Coffee House was put in place. It seated about 24 people - Mrs Buchan made the pancakes, and Lesley was in charge of making the coffee. This brew was made in an urn - from Nescafe instant coffee and Carnation Milk. This was how it all started. 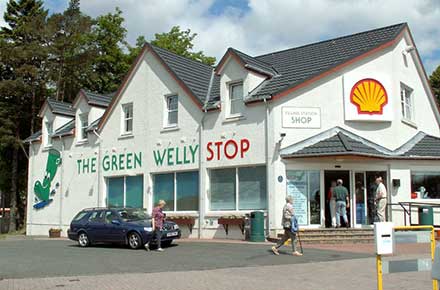 Inconsiderately, it was the summer of 1967, right in the middle of the Glasgow Fair Holiday that Fiona decided to make an appearance - Lesley was rushed off to Oban Maternity Hospital. Oh boy, was Fiona popular!! Never the less, life and business went on.

It soon became apparent that the wee coffee shop could not cope with the number of people visiting. Coaches had started making an appearance on the road. Derek, willing to pay the consequences of a Les 'tongue lashing' went away and spent another £32 on another shed. This time, it was made into the first craft shop.

The first home-build that the family attempted was the first toilet block. They realised from this very early day that it was essential to have the best toilet facilities that you could build/afford. Fiona recalls as a child watching Lamond out at the septic tank, using the rods, to unblock the drains! More detail? I don't think it's needed! 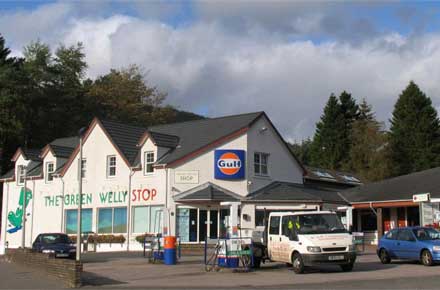 With the addition of another shed the following year, the business became 'The Clifton Coffee House and Craft Centre. Remember the pond outside the front door? When the queue was out-the-door, the waiting customers used to throw coins onto the flat rock in the middle!

In the winter of 1973/4, the coffee house was demolished, and the restaurant was built - a brave move to make the floor area that big in those days! The Food Shop was added with Whisky Galore at this time.

In the 1980's, the family opened The 'Green Welly Shop' aye- it sold wellies and barbour jackets! - it was christened by Derek and his buddy, Trevor (over a few bottles of wine), this was what the business became known as by customers - one of those hard to forget names!

Eventually, the family 'took the plunge' and rebranded the whole business 'The Green Welly Stop' - the biggest change was the demolishing of the original house and the rebuild of the Filling Station, to expand the Outdoor Store and provide staff accommodation upstairs. This picture shows you what the business is like today.